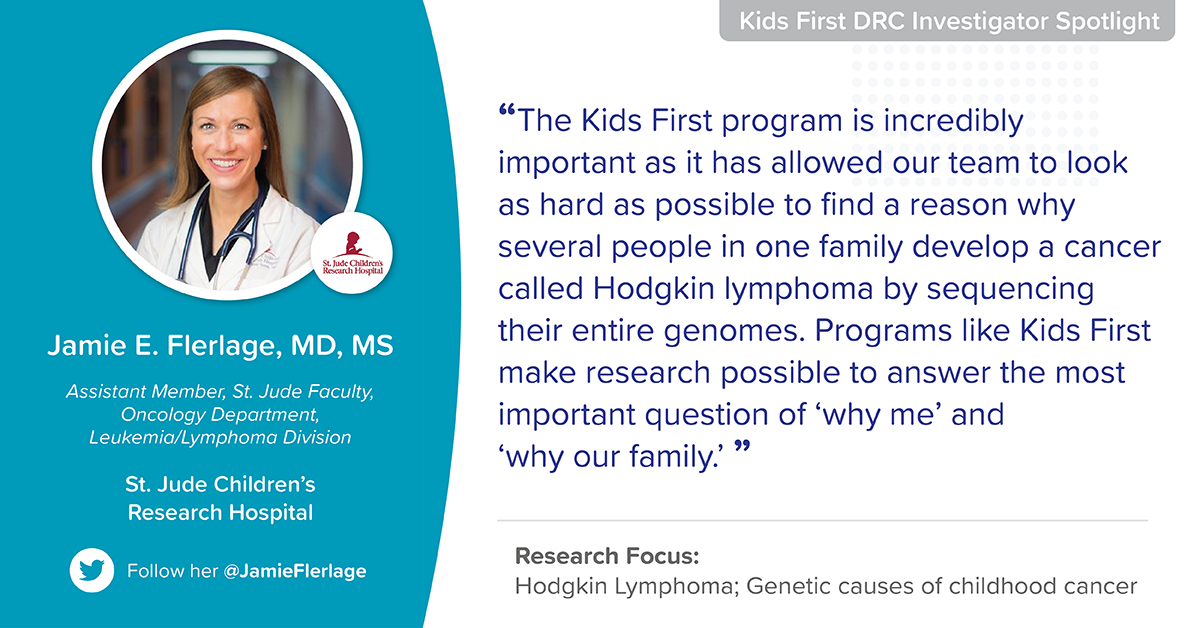 Pediatrician and pediatric hematologist/oncologist, Jamie Flerlage MD, came to St. Jude in 2012 to complete a three-year pediatric hematology/oncology fellowship and she never left. Today she is an assistant member of the Oncology Department faculty where she specializes in the investigation and treatment of Hodgkin lymphoma, a cancer of the lymphatic system, which makes and stores infection-fighting cells.

Hodgkin lymphoma patients are usually treated with chemotherapy and radiation therapy. Although most children are cured, some experience negative late effects from treatment later in life, which can include problems with growth, organ functions and second cancers.

Patients in the cHOD17 frontline trial receive a carefully adjusted therapy. Flerlage and her colleagues at St. Jude, Stanford University and Dana-Farber Cancer Institute want to determine whether chemotherapy, plus a reduction in steroids and/or radiation treatments, can cure the cancer while reducing late effects.

Flerlage also leads an international working group, SEARCH for CAYAHL, which seeks to harmonize staging and response criteria across all research consortia so that data from clinical trials in different countries will be easier to compare.

Most recently she co-founded a pediatric and adult global initiative with Dr. Michael Binkley of Stanford called GLOW (Global nLPHL One Working group) to promote rigorous scientific study of nodular lymphocyte Hodgkin lymphoma, a rare subtype of the disease.

A native of upstate New York, Flerlage obtained her undergraduate and medical degrees from the combined, 8-year Leadership in Medicine program at Union College and Albany Medical College, followed by a pediatric residency at Johns Hopkins Children’s Center, where she was chosen to serve an extra year as chief resident.

Stay in the loop with data sharing and Kids First DRC news.